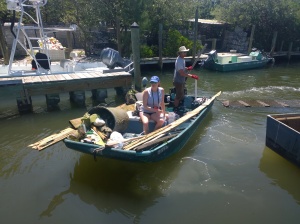 Capt. Nate Meschelle, at the helm, turned to the boat of volunteers.

The boat of locals erupted in laughter.

Meschelle was one of a handful of commercial fishers from Cortez who volunteered time and boats for a coastal cleanup May 9.

The cleanup was organized in conjunction with the Great American Cleanup with the help of Audubon Florida, Keep Manatee Beautiful and Manatee County, which provided a dumpster, gloves and trash bags.

Split into groups by the boatload, 28 volunteers hit the shorelines of Cortez and nearby mangrove islands, including Tidy Island and Bird Key.

The area is known locally as “The Kitchen.”

“Back in the day, when you wanted something to eat, that’s where you would go. That’s why its called The Kitchen,” said Coarsey.

Meschelle brought one group of volunteers to Tidy Island, where debris that washes ashore at high tide piles up, Meschelle said.

The tide carries the trash onto the mangrove island and, as the tides go out, it’s trapped by mangrove roots.

Paul wasn’t necessarily looking to pick up the washed-up trash, but to help guide the volunteers around sensitive bird roosting areas — particularly on Cortez Key Sanctuary.

“(The key) is one of the most important bird nesting sites in Sarasota Bay. We were really glad the cleanup work didn’t impact nesting birds and, in the meantime, they were able to get trash off the island,” said Paul.

Known locally to fishers as Bird Key or Kitchen Key, the mangrove island was leased from the state by Audubon Florida in 1981.

The key is an important nesting ground, where colonies of pelicans, cormorants, herons, ibis, roseate spoonbills and frigate birds frequent the island by the hundreds.

The key is posted as “No Trespassing” to protect nesting birds. The wading and shorebirds nest in the spring and summer months.

Paul said she met Coarsey two months before the cleanup, as she was launching from Cortez for a bird survey and Coarsey was pulling into the dock.

The two collaborated on the cleanup, a necessary step, Paul said. People are not allowed in the sanctuary without an Audubon manager.

Paul likened the mangroves in estuaries to a kidney. Things get trapped in the mangroves during high tide, effectively cleaning the bay waters and ultimately the Gulf of Mexico, which connects to Sarasota Bay.

“(Fishing For Freedom) is a great group and how lucky are we that they’re taking this positive approach,” said Paul. “This group is taking a real leadership role.”

Coarsey said the 20-yard dumpster provided to the volunteers was “more than full” and he speculated they could have filled a second dumpster. The garbage collected in five hours weighed more 6,000 pounds, Coarsey said.

Much of the debris collected consisted of lumber or drift wood, including a portion of the hull of a boat. Among endless beer cans and bottles, other items collected included full-sized trashcans, a deflated basketball, lawn chairs and a chainsaw.

This article was originally published in The Islander May 20, 2015.

Cortez, Fla. – As workers in Tallahassee prepared for a day in the appellate court, two Cortez fishers packed their bags.

The constitutional amendment restricting gill nets and mesh sizes of nets rocked the commercial fishing industry in Cortez, and other commercial fisheries across the state, when approved by Florida voters in 1994. The ban took effect in 1995.

Fulford’s ruling in Wakulla Commericial Fishermen’s Association v. Florida Fish and Wildlife over turned the net-ban, making it ineffective, which was quickly met with an appeal and stop order from the FWC.

The now 20-year legal battle over the ban is seeing an emergence of a grassroots collective representing fishers across the state of Florida and is gaining traction on the Fulford ruling.

Cortez fishers Coarsey and Nate “Toasty” Meschelle met up with the Fishing for Freedom group in Tallahassee May 15 to attend a protest and hearing.

Coarsey said 50-60 people attended the peaceful protest in Tallahassee outside of the FWC building, most wearing their FFF T-shirts. The shirts have a prominent phrase across the back reading, “Biology vs. Politics.”

Following the protest, FFF members filled the courtroom for the hearing.

“We represented Manatee County. Is it important we went up there? Yes,” said Coarsey. “They’re taking out a species of fisherman.”

The hotly contested net-ban intended to address sustainable fishing practices, and almost exclusively affects mullet fishers. The FWC contends the rule is intended to preserve fish populations by preventing over-fishing. The Wakulla Commercial Fisherman’s Association, the group facing the FWC at the 1st DCA, say the rules do not achieve the intentions.

Coarsey says limiting the mesh size of the nets means it is more difficult for fishers to net legal-sized fish and juvenile fish are caught instead, producing a bycatch that the net-ban intended to eliminate.

A three judge panel listened May 15 to testimony from attorneys representing the Wakulla group and the FWC. A ruling for the case will be issued after the judges have reviewed the testimony and any new evidence offered.

If the panel of judges sides with the Wakulla group, the Fulford ruling will be upheld and the net-ban will be lifted.

This gallery is a collection of photos taken in Cortez Village, a fishing community in west-Bradenton. The photos were taken between October 2013 and October 2014.

Click on an image below to view it full-size and use the arrows to flip through the gallery. 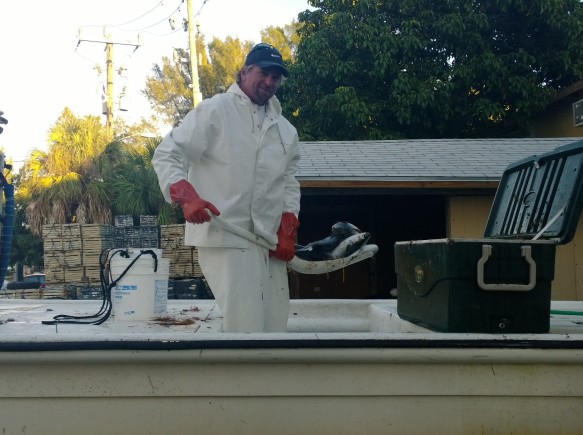 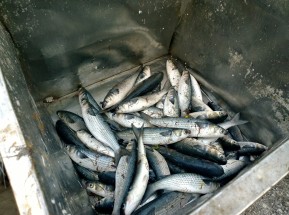 Female mullet, prized for their red roe, are sorted at the fish house, where the going price is $2.20 per pound. Male mullet are worth only 10 cents a pound.

Employees from Cortez Bait and Seafood Nov. 9 crack the tough shells of stone crab claws before they are sold to hungry patrons at the Stone Crab Festival. 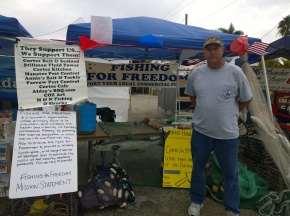 Mark Coarsey, president of the Fishing for Freedom Manatee chapter, stands in front of a fishing net exhibition Nov. 9 at the Stone Crab Festival in Cortez. 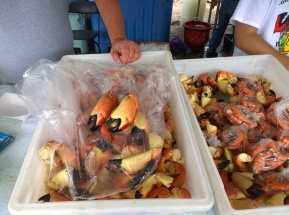 Stone crab claws are ready to be sold Nov. 9 at the Stone Crab Festival in Cortez. 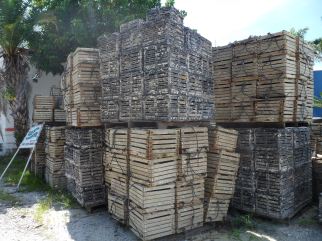 Crab traps are stacked on pallets. 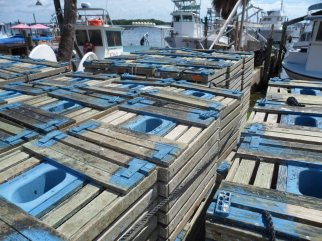 Crab traps are stacked by the dock before they are baited and dropped into the water.

Crab traps are stacked between the Star Fish Co. and A. P. Bell Fish Co. before the start of stone crab season.

Whole-fried sheepshead sits on top hundreds of crayfish, waiting to be served to hungry patrons at the Cortez Commerical Fishing Festival Feb. 15. 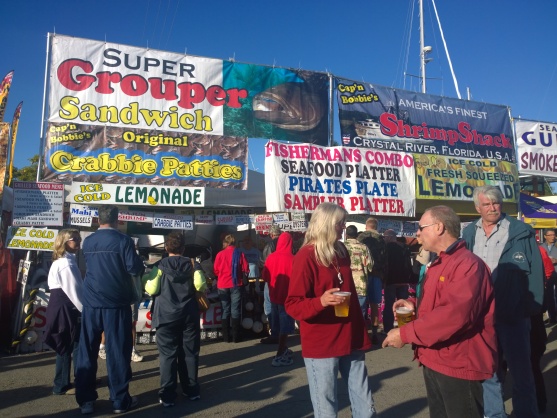 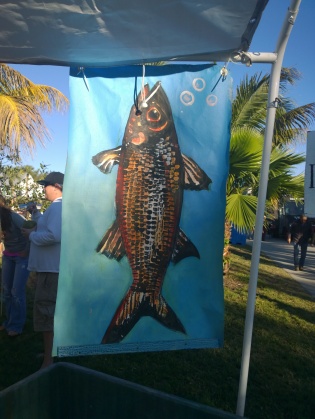 Crayfish cooks in a large pan, alongside generous helping of other seafood inspired dishes in the historic fishing village during the Cortez Commercial Fishing Festival Feb. 15. 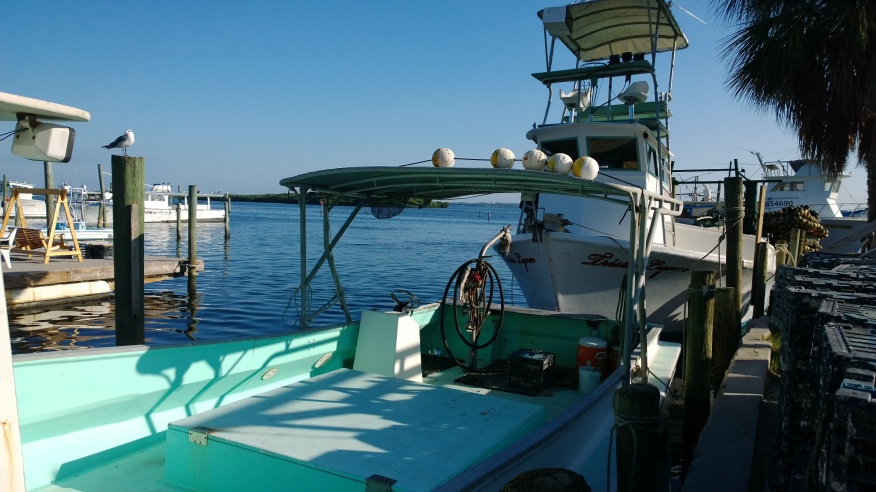 Cortez, Fla. – On Oct. 22, the ban on gill net fishing, imposed in 1995, was lifted by a circuit court judge in Tallahassee. Just over two weeks later, on Nov. 6, the First District Court of Appeal in Tallahassee granted the Florida Fish and Wildlife Conservation Commission an automatic stay on the injunction, allowing FWC officials to enforce the ban.

The lifting of the ban was seen as a victory for the lawsuit on behalf of the commercial fishing industry, headed by Wakulla County mullet fishers against the FWC. Despite the victory, commercial fishers in Cortez aren’t surprised by the restrictions back in place.

“If the ban was lifted, they were right there waiting to overturn it,” said Kathe Fannon, a fourth-generation Cortez fisher.

The ban, which took effect in 1995, has been disputed as unfair and ineffective by commercial fishers across the state but defended as a necessary conservation measure by the FWC.

“No one came out here and asked us how we fish, how we maintain and how we thrive,” Fannon said. “If they ever went out with us, watched how we work, they never would have done this.”

Leon County Circuit Court Judge Jackie Fulford, who rendered the Oct. 22 ruling lifting the ban, did just that. Fulford considered the issue for a year and went mullet fishing to see how the nets work. Her ruling was a result, in part, of her experience, and she called the net-ban law an “absolute mess.”

“After the net ban in ’95, four out of the five fish houses here went bankrupt three weeks later. We’ve been here for over 100 years thriving, through the great depression,” Fannon said. “They didn’t take the nets, they destroyed an industry that’s been here since the beginning of time.”

The ban’s intention was to eliminate by catch, the unintended capture of juvenile fish and other marine life. An agency rule aimed at this purpose defines a gill net as any net with a stretched mesh greater than 2 inches. The rule left commercial fishers to use hand-thrown cast nets, which do a poor job of catching legal-sized fish and kills juvenile fish in the process.

The lifting and replacing the gill net restriction may not be all for naught.

“At least people are thinking about it and I think some people are seeing that (the net ban) wasn’t done properly,” Bell told The Islander in an earlier interview. Florida residents are “at least more respectful of what these guys go through to bring domestic seafood to consumers.”

The ban-a constitutional amendment was passed in 1994 and was supported by 72 percent of Florida voters. Fannon cites the media coverage leading up to the ban for the skewed perspective on the effects of gill nets.

“Florida Sportsman magazine, the Bradenton Herald all ran photos of dead, bloody dolphins, the same beautiful dolphins I take people on charters to see, as a result of gill nets. It’s just not accurate,” Fannon said.

The fishers of Cortez pride themselves on their long lines of family operations and hand-manufacturing of boats and nets. Fannon said, the nets she made with her father were designed to catch larger fish, and allow juveniles to break free, returning to the water to spawn to maintain a sustainable supply. She also said the Cortez boats, known as kickers, were designed to protect the seagrass beds.

“It’s a finely tuned process we’ve perfected over generations and we ran it like professionals,” Fannon said. “We’ve been here for over 100 years making a living from these waters, and we treat it with respect.”

The stay on Fulford’s injunction will remain in place until the appeal’s court has considered the claims. For now, no gill net fishing.

This article was originally published in The Islander Dec. 18, 2013.